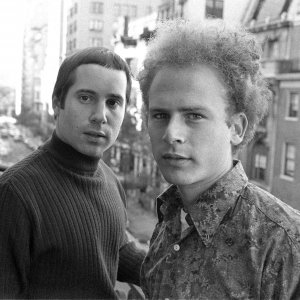 Maybe the blog should be called 1 Great Song, because the great songs are rarely perfect. “Money (That’s What I Want)” recorded by The Beatles at the end of an 11 hour recording session. One take. John Lennon’s voice is raw and raggedy, but perfect for this song. “Anarchy in the U.K.” by the Sex Pistols. They couldn’t sing, they couldn’t play, but rarely will you hear a song performed with more passion or dedication. “To Be Alone with You,” begins with Bob Dylan asking his producer if tape was rolling. The song feels like a work in progress. It feels accessible and easy to listen to. These are all great songs, and they are far from perfect.

But “The Boxer” by Simon and Garfunkel is a perfect song, and it is a great song.

The centerpiece of the masterful Bridge over Troubled Water album, “The Boxer” is an autobiographical song Simon wrote about being lonely and struggling in New York City.

“Laying low, seeking out the poorer quarters
Where the ragged people go
Looking for the places
Only they would know”

The song is about Simon, but it is really about every person who has struggled, who has failed, who has tried to persevere over seemingly impossible odds. We get up every day. We face the challenges ahead. We do our best to stand tall.

“In the clearing stands a boxer
And a fighter by his trade
And he carries the reminders
Of ev’ry glove that laid him down
Or cut him till he cried out
In his anger and his shame
“I am leaving, I am leaving”
But the fighter still remains”

The chorus is wordless, only “lie la lie” repeating over and over again. We each can put in our own words. “I have won.” “I  need more time.” “I love you.” “Where should I go?” This song is perfect because we are each able to be in the song. The song is about us.

The lyric is not where the perfection stops. Simon, along with studio musicians and legendary engineer Roy Halee, worked on “The Boxer” for over 100 hours, and the results are nothing short of remarkable.

Beginning with a simple duo of acoustic guitars the impeccable Simon and Garfunkel harmonies, a bass drum helps to move the story along. One beat, then two, then one. As the second verse begins, a bass harmonica churtles along under the vocals, a perfect contrast.

As the narrator admits to “taking comfort” in the “whores of 7th Avenue'” a piccolo trumpet carries away the sadness and shame. Together we all sing “Lie la lie” in the chorus, sharply punctuated by nothing less than the sound of canon (actually, just a powerfully recorded bass drum), almost feeling like the boxer is hitting us square in the jaw. Strings come in as the song crescendos to the narrator imaging himself as a boxer, standing in a clearing…”the fighter still remains.” All goes quiet, and we are back to the quiet acoustic guitars as the song ends.

“The Boxer” is at once grandiose and simple. Indulgent and sincere. Not a single note is misplaced. The production values are pristine. The instrumentation is exceedingly creative and thoughtful.

Perfection is found in imperfection. The homemade loaf of bread where the crust is just a bit too crispy. The speaker who pauses between phrases to think of what to say next. The voices that are not quite in unison during a song. These imperfections make life interesting and fun. the imperfection is where we find greatness.

“The Boxer,” perfect though it may be, is also great. It is 1PerfectSong.

“The Boxer”
Written by Paul Simon
Recorded by Simon and Garfunkel
Released March 21, 1969