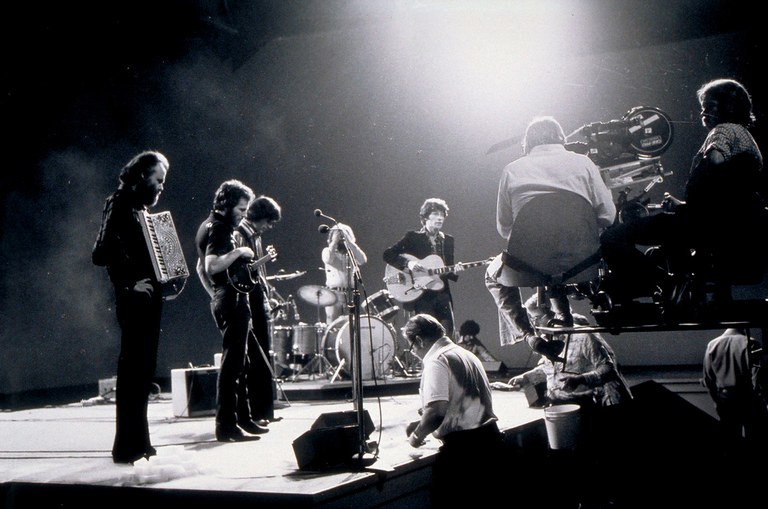 Musicians often cite their musical influences when describing how and what they write. As an aficionado rather than a practitioner, I often think of the friends and family members who have influenced my musical tastes; a long time close friend who introduced me to Springsteen, a college buddy who put me on to Graham Parker after learning of my love of Elvis Costello, an old girlfriend who taught me that there were outstanding female singers and songwriters I should be listening to such as Suzanne Vega, the Indigo Girls, and of course, Janis Joplin.

Then there is the host blogger himself, who introduced me to one of my all-time favorites, The Band. Sure, I knew “The Weight” (which I thought was called “Take a Load Off Annie, not even the proper name, Fanny) and possibly even “The Night They Drove Old Dixie Down.” But I didn’t know the name of a single band member, nor that four fifths of the band was Canadian. I didn’t know that their “farewell” film, The Last Waltz was and is still considered by many to be the greatest rock film of all time, nor the fact that they boasted three of the most singular vocalists of the 60’s and early 70’s. I didn’t even know that they were the group that backed Dylan when he went electric, much to the chagrin of folkies worldwide.

My friend Larry changed all that when he put me all in with a double cassette soundtrack of “The Last Waltz.” They were so distinctive; Levon Helm’s rich Arkansas twang, Rick Danko’s throaty tenor, and Richard Manuel’s backing falsetto along with his poetic lead vocals from time to time. All of this vocal majesty brought to bear on the brilliant songwriting of Robbie Robertson, supported by the classically trained keyboard maestro, Garth Hudson. I could write something about over a dozen 1PerfectSongs by The Band (in fact, I think our host already did one), but I haven’t been able to get this one out of my head for a week.

There are typically two types of love songs — those that express joy and the exultation in a thriving relationship, and those that emphasize anguish and heartbreak. “It Makes No Difference” falls emphatically into the latter category. Beginning with a weeping guitar introduction from Robbie, dovetailing into the opening lines:

It’s not the originality of the lyrics or complexity of the music, but rather the combination of simple phrases and lilting country-rock chords, combined with the anguished heartache in the voice of Rick Danko that make this song special. Music critic Barney Hoskyns wrote, that “there is something so elemental in how Danko expresses his loss that it transcends self-pity.” The depth rolls in during the chorus with a gorgeous three part harmony: Rick singing melody on the bottom, Levon, atypically twang-less in the middle, and Richard’s ethereal falsetto on top. Again, there’s no magic in the words, no breaking of heretofore untapped lyrical majesty, just simple lines, beautifully sung over heart-piercing music.

And the sun don’t shine, anymore.
And the rains fall down, on my door.

Just a few lines later, a small shift in what is really a musical rather than lyrical chorus:

But the clouds never hung so low, before.

And the dawn don’t rescue me, no more.

Well I love you so much,
and it’s all I can do,
just to keep myself from telling you…

Turning back to chorus, again with different lyrics:

That I never felt so alone, before.

In comes a Robbie Robertson guitar “solo.” I say that in quotes because the lyricism of his playing sounds almost like another verse of the song without words, as does Garth Hudson’s effortless saxophone picking up the plaintive moan, then trading lines and overlapping with the guitar. Mies Van der Rohe said, “Less is more,” and while he was referring to architecture, sometimes the axiom applies to other art forms. It’s an apt description of this tune. It’s just five guys playing and singing well, with passion and meaning. Six and a half minutes amble by as the beauty and simplicity of the words and music tell a familiar tale of anguish.

The Last Waltz, which was filmed on Thanksgiving Day, 1976 at the legendary rock club, the Fillmore West, came out in 1978 and ostensibly chronicled the end of The Band as a band. It was really Robbie Robertson’s farewell to the band as he moved on to more diverse projects, while the other members kept playing for over two decades despite the suicide of Richard Manuel in 1986. I enjoyed the show I saw in 1994 at the Park West. Rick and Levon could still really belt, Garth could still dazzle on the organ, and the supporting members who joined them were excellent musicians. But The Last Waltz was really it.

The clip begins with a humorous anecdote and the song picks up around :55.