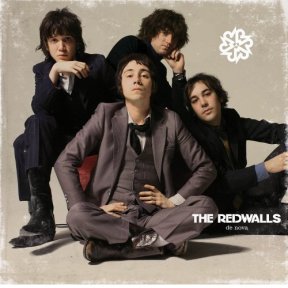 The centerpiece of my teenage room was my stereo. I had a killer turntable with a receiver, a dual tape deck and beautiful sounding speakers on either side of  my bed. Behind my turntable were two milk crates, stacked on top of one another, holding my 250 record albums.

The first album I really remember listening to was The Beatles Greatest Hits, 1962-1966. I couldn’t believe the joy of “Eight Days a Week.” The opening chord of “Hard Day’s Night” almost took my breath away. “And I Love Her” was mysterious and sad.

Fast forward to June of 2005, and my daughters and I were driving around, running errands on a beautiful spring afternoon. We were listening to WXRT (the finest radio station in Chicago), and they were doing a live broadcast. A new band was introduced who was going to be performing a song live. The Redwalls. I had never heard of the band, and I was only half listening as I was trying to enjoy the day with my daughters.

But the easy strum of the acoustic guitar caught my attention. And then they began to sing…”These days it feels as though, I’ve lived a lonely lifetime.” The rest of the band fell in, singing perfect harmony behind the lead singer, and they were immediately reminiscent of The Beatles. The more I listened to the album I eventually bought, De Nova, I realized that this group sounded like The Beatles not because they were trying to sound like The Beatles, but rather because sounding like The Beatles were just who they were. They were being sincere without mimicking. They were honoring without copying.

I became even more intrigued when I learned that this band came from the town next door to the town where I grew up. We grew up on the same streets. We went to the same schools. Though much younger than me, I imagine they too listened to The Beatles as kids, that they stood in front of the the mirror, that they pretended they were on stage. But, unlike me, they turned their rock and roll fantasies into reality. They learned how to play guitar. They could actually sing. Listening to The Beatles with different ears than I did, they understood the harmonies and the songwriting, and how to make something contemporary that connects to treasured music and memories from our shared past.

“Falling Down” is a song John Lennon could have absolutely written about the ridiculousness of the FCC in the wake of Janet Jackson’s performance at the Superbowl.  “Love Her” is an infectious, almost anthemic guitar driven, foot stomping good time, and “Glory of War” counts down to a campfire anti-war singalong . The songs are deceptively simple, but this is a rock band that is having fun while making excellent rock and roll songs evocative of a time long ago.

Sadly, The Redwalls didn’t make it. They were dropped by their record label, recorded another album that lacked the charm and enthusiasm of the first album, and disbanded around 2010.

The Redwalls were brothers Justin and Logan Baren, Andrew Langer and Jordan Kozer. I don’t know what any of them are doing now, but I hope they are proud. I hope their families are proud of them. I hope they still make music today, because not too long ago, they made a great album.