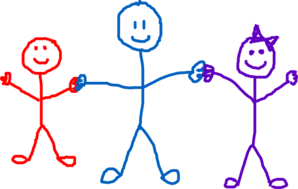 Meet the Enterprise Social Network family. I call them the “ESN’s” for short. They live in a rather remote area, but they stay connected to their extended family of social networking collaboration platforms through regular blog updates, comparative news articles and the unplanned, sometimes uncomfortable reunions at trade shows and conferences.

The ESN’s have three children. The youngest child is Slack, the oldest child is Facebook, and the awkward, middle child* is Yammer.

Facebook has been around for a long time. Facebook is more mature than the other two children, but is often harder to control. Sometimes Facebook likes to be called Facebook for Work, sometimes Workplace, sometimes just Facebook. Every day is something different, and all we can expect is a continuous series of conversations about our new president and the recent vacations of friends we have not seen in 20 years, all while looking at funny cat videos and taking quizzes that reveal which 1970’s TV sitcom star we are most like.

Slack is the youngest, and is wildly charismatic. Everyone has heard about Slack, and they want to be around Slack. At first, they can’t get enough of Slack! We can’t blame them, Slack is fun to be around. But, being so young, Slack doesn’t always know how to keep people entertained and interested, and soon they leave. Slack isn’t sad yet, because as soon as someone leaves it seems someone new shows up to fill the void. Facebook could have told Slack about what to expect, as Facebook as been through the same exact experience. But, Slack is just a kid…have you ever tried to explain something difficult to a kid? Do they listen?!?! My point exactly.

And then there is the gangly, self-conscious Yammer. Still growing, still figuring out what it is going to be. Yammer seems to be a happy child, probably because it doesn’t know enough to be unhappy! I first met Yammer about 4 years ago…now, that was a wild kid! Still a standalone application, still trying to connect to people on its own terms with little regard for what was happening in the surrounding world. But, as Yammer continues to grow up, Yammer is recognizing what it is going to take to succeed. Yammer has seen the mistakes made by Facebook…no way Yammer is going down that road! Yammer is always watching carefully what Slack is up to. Yeah, Slack is cool and has a lot more friends than Yammer, but Yammer is beginning to see what works, and what it is going to take to succeed. Yammer is going to keep a low profile, but is growing up fast, and it is wildly optimistic about its future.

A few things Yammer has been working on as it struggles to become more mature.

ACCESS: Yammer has made up it’s mind, but it took a while to get there. That sometimes happens as we grow up. At first, users could log in using their email address and a Yammer unique password. Then, Yammer woke up one day and said…”Well, since you are using Office 365, you now have to use your Office 365 password. No, I don’t have to tell you to do that in advance. You should just figure it out. You’re not the boss of me!”

EDITING: Although we have been able to edit posts on Facebook for years, Yammer recognizes that since it hangs out in law firms, accounting firms and business organizations around the world, a legal and audit trail often needs to be maintained. Editing is a complex proposition, but it has been working on it. Yammer can’t wait to announce editing soon, and rub it in Facebook’s…face!

FILE STORAGE: Yammer is a smart kid, sometimes a little too smart for its own good. Case in point; Yammer only stores files in discussion groups with no folder functionality. Yammer argues that adding folders adds another layer of complexity to its user experience. Is Yammer going to tell you which sub-folder to look in? Ha! I doubt it. Name your group well, name your file well, Yammer is sure you will find what you need. But soon, Yammer is going to offer a OneDrive file library for every group which will bring the long awaited file folder structure. Yammer begrudgingly admits this may help, but still thinks you should use topics to organize and find information.

EVEN MORE!: So clever…Yammer is working hard to catch up to Facebook while staying just a step or two ahead of Slack. Soon Yammer will soon be boasting Outlook calendars, Sharepoint sites, Planner integration, OneNote integration and Sharepoint document libraries. Yammer has plans, big plans!

Growing up is hard, being the middle child is harder. Yammer looks at is younger sibling, and realizes that while Slack has friends and likability that may forever remiain elusive, Yammer is OK with that. Yammer continues to concentrate on offering meaningful features for business and collaboration, connectivity to other tools and a road map that promises more functionality, mobility and options.

Yammer looks at its older sibling, Facebook. Yammer realizes that as fewer young people use Facebook today, fewer working adults will be using it in the years to come. Yammer has a strong self identity today, one that does not include Candy Crush or baby pictures, and it knows that in the years to come it will offer businesses communities meaningful opportunities for seamless collaboration, transparency and communication.

Yammer, you are a little awkward and unsure of yourself now. But kid, we see good things for you in the future. Keep up the good work!

*NOTE: As a middle child myself, I feel Yammer’s pain.