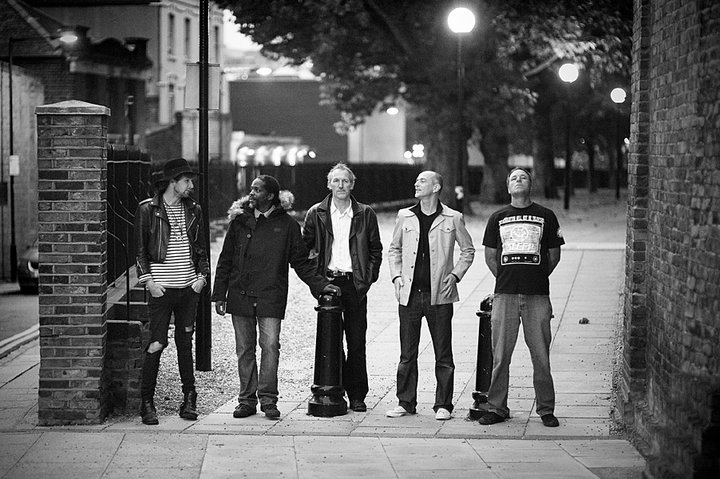 My friend Michael had just come home after spending a college semester abroad in London. We met for lunch to catch up after his return home, and he handed me a cassette tape. “I heard these guys performing on the street in London, and they were great. Listen to the tape…You’ll love it.” Michael told me that the lead singer’s name was Trashmouth, and he played the washboard. Another guy played the Tea Chest Bass, which had only one string. This was my kind of music. The album was called Isometric Boogie.

But I was skeptical. I had bought music from bands performing on the street only to get home to find hissy, low-fi recordings that I could not listen to all the way through, not even once. But, as soon as I popped this tape into the tape deck of my 1983 lime green Honda Accord, I knew this was different.

The recording was crisp and clean. The first song was “Everlasting, Shining Peace of Mind.” The one string bass thumped along, a syncopated guitar starts up, and the growly lead singer’s voice comes in. “All I ever wanted was a reason to by happy, happiness can be so hard to find.”

I came to learn that The Gutter Brothers began their career busking in the streets of New Orleans for loose change, and eventually made their way to London, filled out the band a bit with more personnel, recorded Isometric Boogie (their debut album), and once again found themselves busking on the street, where they were heard by my friend Michael.

Every song is beautifully written and performed. It has a contemporary sound while firmly steeped in a skiffle/rockabilly tradition. The guitar is clean and the songs are about cars, crime, girlfriends and the family homestead. This is American music at its finest, by way of New Orleans and London.

“Live and Learn” begins with a sweet flute alternating with a cow bell and high hat cymbal, eventually joined by a high, melodic electric guitar. The first thing we hear in “Hand Jive” is the familiar, wonderful Bo Diddley beat over which we hear the story of Way out Willie, and his girlfriend Talking Billie, a great re-interpretation (though not a cover) of the Eric Clapton classic. “The Frame” is told from the point of view of a man behind bars, pleading his case, swearing it wasn’t him! The remote family farm burns down as the singer helplessly wonders “Where do They Keep the Water?”

For as long as my car had a tape deck, I played The Gutter Brothers, and I was thrilled a couple of years ago to find the album on iTunes. Much to my delight, the music held up. Once again, I was able to enjoy this wonderful album, but now I could share it with my family.

One evening, I was playing the album during dinner, and the as the brilliant last song came on, I asked my eldest daughter if she could guess what the song is. She listened. The song sounded as if it was written for a lone horseback rider, slowly loping along at sunset. The bass thumped, the Jew’s Harp twanged and Trashmouth began to sing.

“You don’t have to be beautiful, to turn me on.”

My daughter’s eyebrow arched. She knew she knew the song, but she could not place it.

“I just need your body, baby, from dusk till dawn
You don’t need experience, To turn me out
You just leave it all up to me, I’ll show you what it’s all about.”

She smiled, it finally dawned on her. “Kiss” by Prince, as a Country and Western twangy hobo lullaby. Unbelievable and brilliant. How did it ever occur to this rockabilly band to cover this neo-Funk classic? We all enjoyed the song over the dinner table, and as the song came to an end, my daughter smiled. But, it was a false ending.

The song continued, and ended again. My daughter began to laugh as she realized it was yet another false ending. The song continued, and ended again and again. My daughter was laughing hysterically, unable to catch her breath. Finally, they song came to its real end and my family was given the wonderful gift of an indelible memory.

The Gutter Brothers never made it. Isometric Boogie did not become a hit, so they re-invented themselves as a harder rocking band. The band continued to tour. Some members left the band, some died, some new members joined. The Gutter Brothers have a website, and they continue to perform from time to time, but I have never met anyone else who knows their music.

We never know when or where the really important music in our lives will appear, or where it will come from. Coming from the streets of London, over lunch with a good friend, or playing at the family dinner table. That music might be from a million selling, Grammy award winning band, or it may be one of the millions of bands that never hit it big…one of the bands that played good music, music that mattered and had personality and style, and just never broke through.

Thank you Michael for bringing this music to me all those years ago. You were right. I love it.