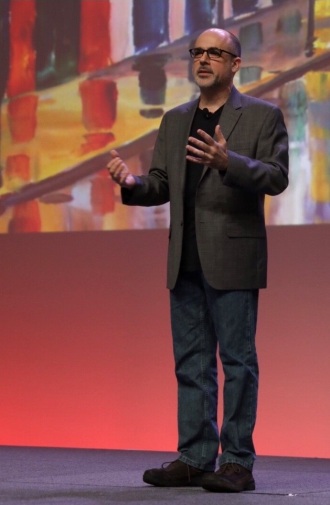 I told a story.

In my blog post “How I Learned to Ignite,” I told the story of preparing for my 5 minute Ignite talk at the 2018 Non-Profit Technology Conference in New Orleans. I wrote that blog article the night before I gave my talk. The next day I woke up early, went for a run, had a light breakfast and went to the conference center.

I paced the room. I nervously practiced my speech. I got set up with a microphone. I paced the room some more. My name was announced. I bounded up the stairs to the stage. I spoke. I told a story about how we introduced Working Out Loud Circles where I work.

Once my speech was over and the story was told, I realized the irony of the experience I just had. Working out loud, I was talking about the practice Working Out Loud in an effort to encourage everyone else to work out loud. It was a Mobius strip of transparency and collegiality.

Honestly, the experience of speaking to the group of 2,000 people is now something of a blur. I really don’t remember much about being up on that stage, only that the slides went quickly. They went very quickly. I can’t prove it, but I could swear they were on the screen a second or two shorter than the 15 seconds I was told I would have before the slides automatically advanced. I talked fast. I skipped words. I did whatever I had to do to keep up with the presentation.

Ultimately, I found the real benefit of my Ignite speaking experience not so much the speech itself, but rather the process of planning the speech, and the relationships I formed as a result of the speech.

As reported in my earlier blog article, planning the speech was an exercise of learning and humility. There were lots of things I thought I knew about my ability to be creative and tell a story, and through multiple mistakes, setbacks and revisions with the amazing support and coaching of NTEN CEO Amy Sample Ward, I was finally able to cobble together a speech that shared some experience, expertise, story and humor.

I also got to know an amazing group of non-profit technology colleagues. There were nine of us who gave Ignite talks that day, all of whom shared amazing stories of their own. One person told what it was like to be a female technology executive, another person talked about finally achieving a long term goal of competing in a triathlon, another person talked about her experience engaging sight challenged users in a social network.  Monica Curca and I became friends during the conference, and she gave an amazing speech about her life as a refugee to the United States, and working on behalf of immigrants and oppressed people throughout the world, helping them to learn how to help themselves.

I got some very positive feedback to my speech, which kind and generous. I don’t know how good it really was, but honestly I don’t care. The important, valuable part of the speech to me was the people I got to know as a result, the things I got to learn about myself and the creative process, and the hope that I have that I may have more opportunities in the future to learn, grow and share…simply by telling a story.